Techqueria & Latinx@Twilio invites you to join the conversation of bridging the gap in tech and social action. 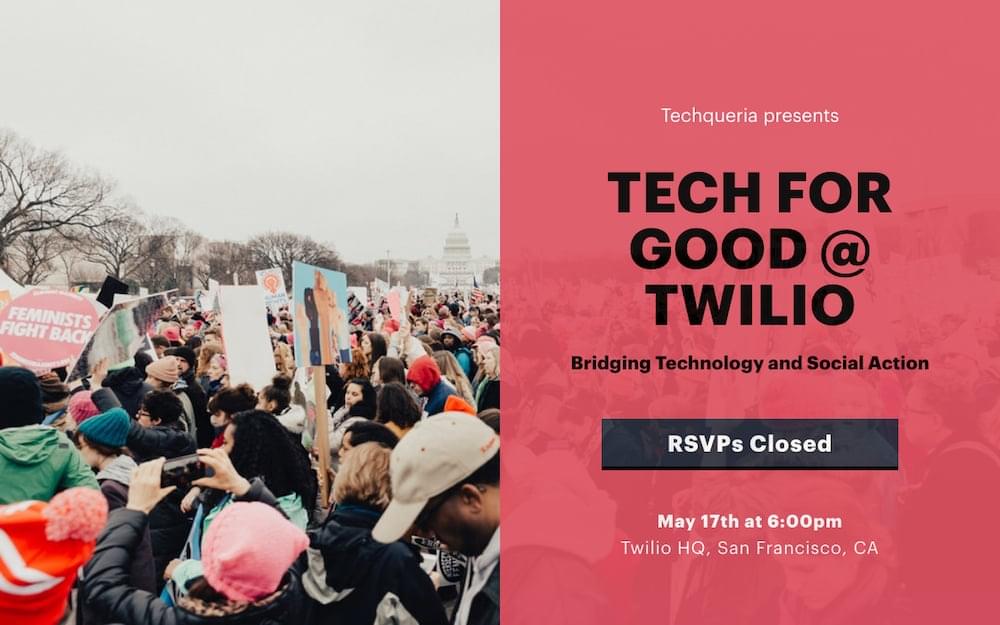 Bring our Community Together

Techqueria & Latinx@Twilio invites you to join the conversation of bridging the gap in tech and social action. Have you wondered what the Latinxs in tech can do to help our communities with local policies? Learn what Techqueria is working on in their #action channel and how you can get involved. Afterwards, there will be a panel discussion discussing how we can increase voter action in our communities through the power of cloud communications and partnerships with advocacy groups.

Ysiad Ferreiras is the COO of Hustle, the leading peer-to-peer messaging platform that allows organizations to create genuine, human relationships at scale. Born and raised in the Bronx, New York, Ysiad is a proud Dominican-American who combines experience in both sales and software engineering to make deep impact in organizations. Ysiad initially came to Hustle to launch its sales and marketing efforts in 2015, and his role has since evolved to overseeing the Sales, Marketing, Legal, Finance, People Ops, and Recruiting functions of the company. Prior to joining Hustle, Ysiad founded and sold a consulting company that worked for the world’s top 50 hedge funds and co-founded and led sales teams for several small-scale startups. As Ysiad has emerged as a leader in the tech industry, he has used his executive spotlight to inspire others with his story of overcoming extreme challenges and finding his way to Hustle, as well as best practices for finding and retaining high impact, diverse talent.

Hailing from the land of Kim Kardashian, Liz’s mission as a software developer is to disrupt tech itself by bringing attention to diversity and inclusion. In her previous lives, Liz was a ghost writer for a celebrity gossip blog, a wedding photographer, and a social media manager for a dog and cat magazine. Coming to tech via a nontraditional route, Liz takes none of her good fortune for granted, and is always pushing the envelope. She enjoys writing, snowboarding, pole dancing, Olympic lifting, and smashing the patriarchy. Liz is also an advocate for young breast cancer patients, trauma survivors, and access to mental health care.

Catherine Bracy is the Co-Founder and Executive Director of the TechEquity Collaborative. Before founding TEC, she was Code for America’s Senior Director of Partnerships and Ecosystem where she grew Code for America’s Brigade program into a network of over 50,000 civic tech volunteers in 80+ cities across the US. During her tenure, Code for America’s Brigade was responsible for 64% of the total growth in the civic tech community in the country. She also founded Code for All, the global network of Code-­for organizations with partners on six continents. During the 2012 election cycle she was Director of Obama for America’s Technology Field Office in San Francisco, the first of its kind in American political history. She was responsible for organizing technologists to volunteer their skills for the campaign’s technology and digital efforts. Prior to joining the Obama campaign, she ran the Knight Foundation’s 2011 News Challenge and before that was the Administrative Director at Harvard’s Berkman Center for Internet & Society. She is on the board of directors at the Public Laboratory and the Data & Society Research Institute.