Hola a todos! We are excited to be partnering with @Techqueria for a real-time discussion on the Latinx experience in tech. Follow along and join the conversation using #LatinxTechTwitter. The conversation starts at 7pm PST, no se lo pueden perder!

We loved this analogy. 😂

Literally what the event looks like rn! #LatinxTechTwitter. If you’re not here right now, you’re missing out on the 🔥🔥🔥 pic.twitter.com/uPKyA00uO8

Lots of folks who came out - wow! 🤯 pic.twitter.com/M2SExvqgH3

We had an amazing time with a dozen different Latinx in Tech speakers speaking about their life and work experiences. 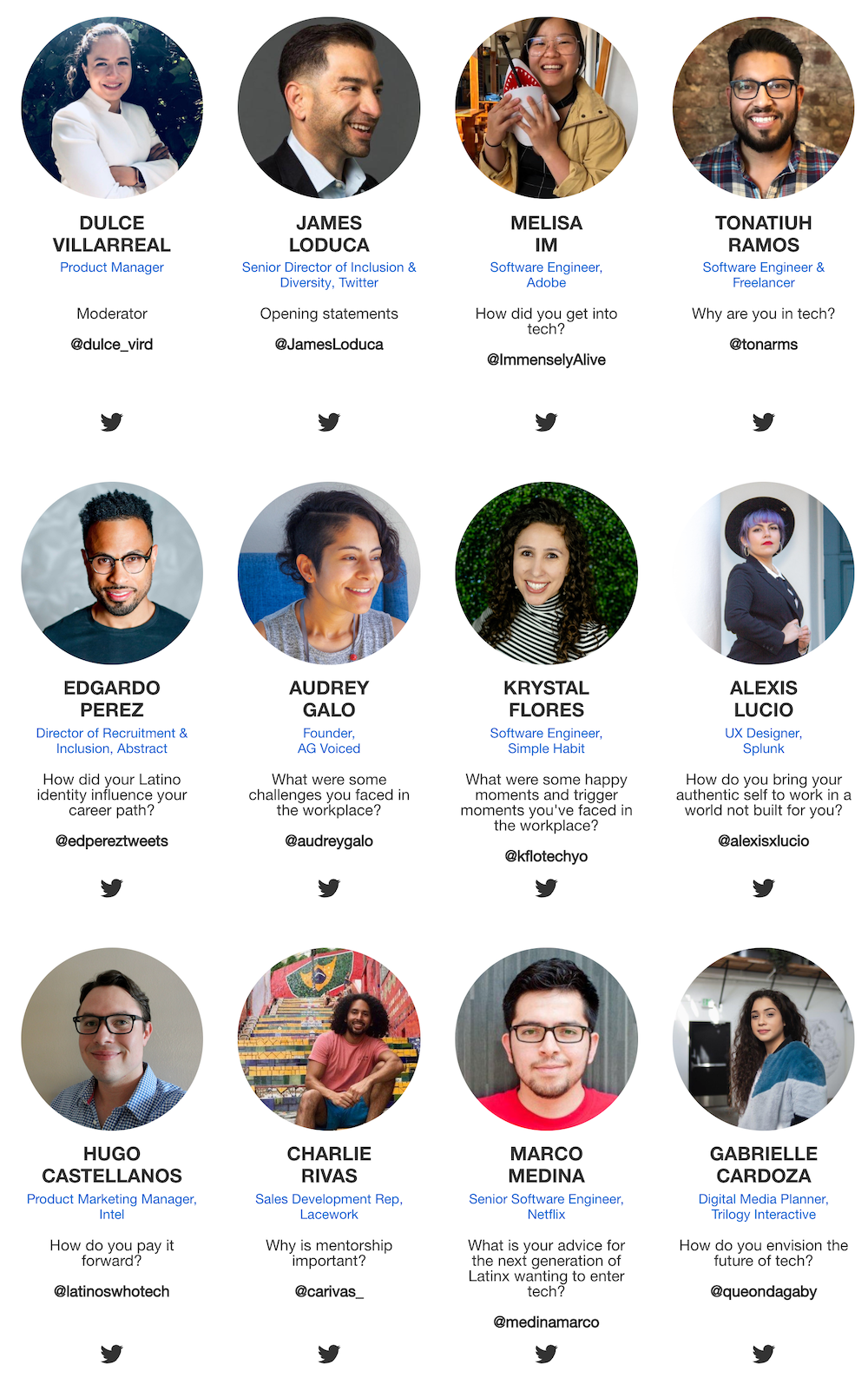 "We don't become who we are in spite of our circumstances but because of them" @ImmenselyAlive #LatinxTechTwitter pic.twitter.com/Jbt8Vb9cHj

Why are you in tech?#LatinxTechTwitter

How did your Latinx identify influence your career path?#LatinxTechTwitter

At my first #SF @Techqueria to see @KFloTechYo on the stage talking about making our workplaces more diverse.

"You do not have to be in a position of power to change an organization." Yes!!#LatinxTechTwitter pic.twitter.com/okSS9x0HBx

How do you pay it forward?#LatinxTechTwitter

Charlie on the value of mentorship.

What is your advice for the next generation of Latinx wanting to enter tech?#LatinxTechTwitter

For the event, we encouraged people to use the hashtag #LatinxTechTwitter on social media. And they did.

Healing and inspiring night seeing our community come together particularly in these times of adversity to be Latinx. We give each other strength. No cabe duda que en español (e portugues) Twitter es mas fuerte 😉 ❤️ #LoveWhereYouWork #LatinxTechTwitter #ElPasoStrong pic.twitter.com/CxZcrZYOkY

There is something fundamentally healing and inspiring to be surrounded by your own community, especially in tech.

Gracias, obrigado for all the hearts and spirt, família! #LatinxTechTwitter pic.twitter.com/lBtpbF6tS7

In fact, we got so much traction Wednesday night with that hashtag that we ended up trending on Twitter for San Francisco. Ellen Pao tweeted about it. There were photos, videos and GIFs galore.

It's awesome to see something so positive trending on Twitter pic.twitter.com/dQS0VnIKXn

The proudest moment for us though was the sheer generosity our Latinx community brought to the table. The event leads recognized the level of trauma our community went through with the El Paso shooting recently and this heaviness was acknowledged multiple times throughout the event as well.

Ergo, we decided to have our main call to action be to donate to the El Paso Community Foundation which had a fund to support the El Paso victims. Our initial target for donations in our meeting the night before was $250. By the end of the event, we ended up with ~$2,500 in donations.

Ending the night on a very positive note. Our community came together to raise $2,435 for El Paso victims of the shooting.
Amazing everyone.

You can still contribute to the El Paso community foundation below! 👇🏽https://t.co/BYItd6fr0X#LatinxTechTwitter #orgullolatinx

We hope this helps @ElPasoCF 💛

To conclude, we’ll end with some words from James… “we are a powerful force”.

Let’s keep at it. ¡Adelante!

We have a whole thread dedicated to all the folks who helped out — we couldn’t have done it without you all!

For videos of the talks, check out the playlist below.

Techqueria had an event in partnership with Twitter Alas to talk about what it's like being Latinx in Tech. #LatinxTechTwitter